A number of choir members took part in an experience of a lifetime.  We travelled to Austria to participate in the 2016 Cantus Salzburgensis Festival in early July 2016.  Our massed choir repertoire included singing Mozart’s Missa Solemnis in the Cathedral for which it was written.  In addition a trip to Prague following the festival we offered a concert with a local choir for a local audience.  Our concerts in Salzburg, Prague and at historic Melk Abbey featured Canadian music.

As part of our lead-up activities, we conducted several fund raising events including  sales of poinsettias, Equator coffee products  tickets to a dress rehearsal of the Ottawa Little Theatre production of “The Murder Room”;  as well as special events:   “An Afternoon in Austria” and a Trivia Afternoon.

We thank everyone and every business and organization who has supported us with our efforts to travel to and sing in Austria and the Czech Republic representing Goulbourn, Ottawa, Ontario, and Canada.

While his busy schedule meant Canadian Ambassador in Austria, Mark Bailey, was not able to attend any Goulbourn Jubilee Singer concerts, he graciously sent a representative to our event at Melk Abbey and invited those singers who travelled to Vienna after the tour to meet with him at the Canadian Embassy in Vienna. Eight of our singers were able to take advantage of this generous invitation and shared our experiences of singing in Austria (see attached photo). The Embassy also included our singing events on the Embassy website calendar of events. 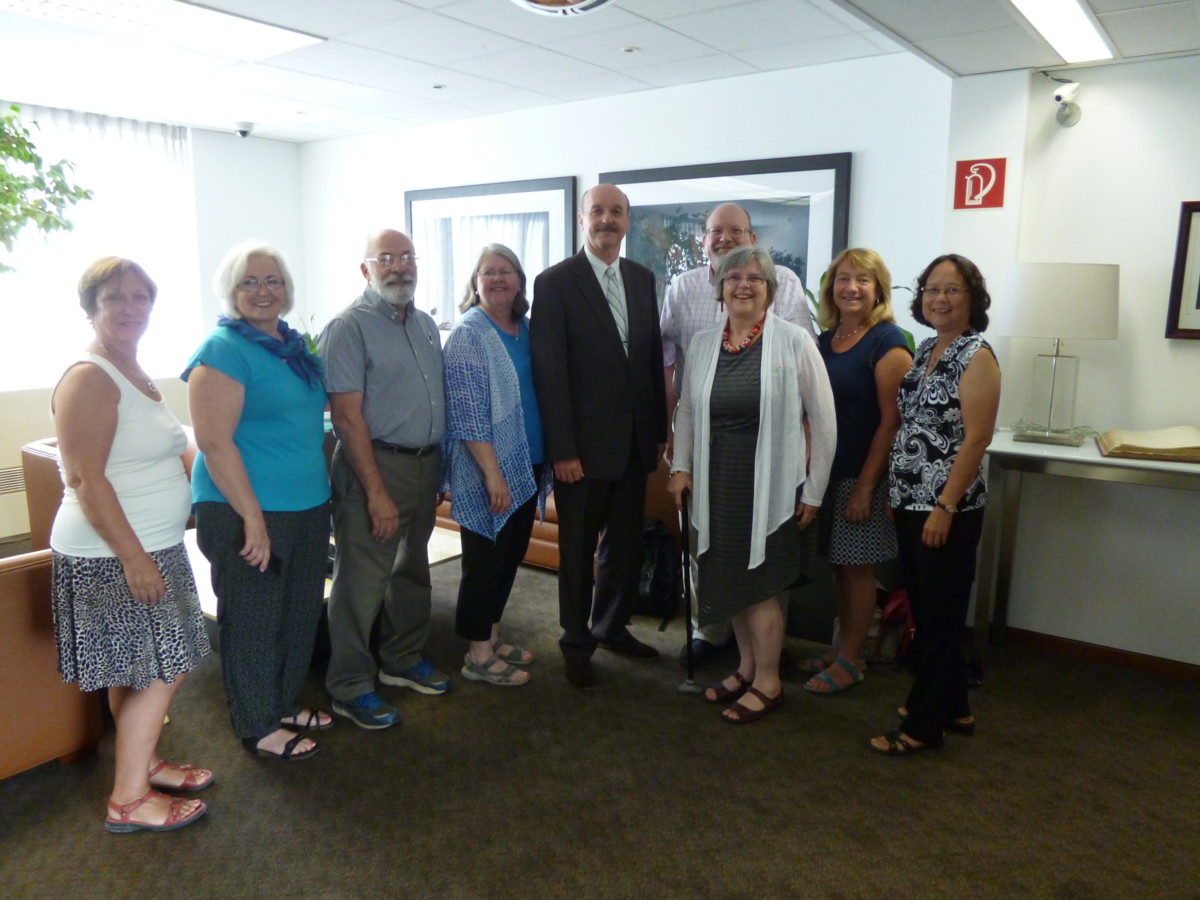 Everyone going their separate ways after 9 days of touring and singing together. Some going home and others off to England to visit family, Holland, Germany to see friends, others touring in Vienna and river cruising the Danube or the Rhine. Bon voyage everyone!

***
More news to come on the group that went on to Vienna!

Our day started off with a ride on Tram 22 to Josefov, the old Jewish Quarter. Our local guide Eva, took us to three Synagogues including one that had been converted to a memorial to the 78,000 Jews of Bohemia and Moravia who were victims of the holocaust. Men were given kippah to cover their heads. We were very moved by seeing the names of the dead, arranged by family, on the interior walls of Pinkas Synagogue. Upstairs included artwork from some of the 10,000 or more children who were interned at the Terazin concentration camp near Prague. We followed that with a walk through the Old Jewish Cemetary with 12,000 graves from the 15th century until 1787 when Jews were permitted to acquire other burial sites.

The final stop was the Spanish Synagogue, a dramatic contrast to the earlier stops, since the beautiful domes and arches with their profusion of colour and light exemplified the resilience of the human spirit.

Our afternoon was free time to explore Prague.

The evening saw us depart for our final performance. Wearing iour formal dress we proceeded along narrow cobblestone streets to the Church of St. Martin in the Wall. This small stone church was built in 1173 and stood alone until the 14th century when it was modified when the wall surrounding the city of Prague was built through the church.

Our concert led off with the Czech choir, Cantarina, 12 women who sang an a Capella program of Czech folk songs, Gershwin, the Beattles and sacred music. The purity of their voices complemented the intimate setting. We then sang our program of Mozart and French and English Canadian folk songs. We joined together for a combined performance Dvorak’s Going Home, arranged by Candian Michael Murray. As this beautiful music soared to fill the spaces of this medieval church the musical portion of our tour came to an end. 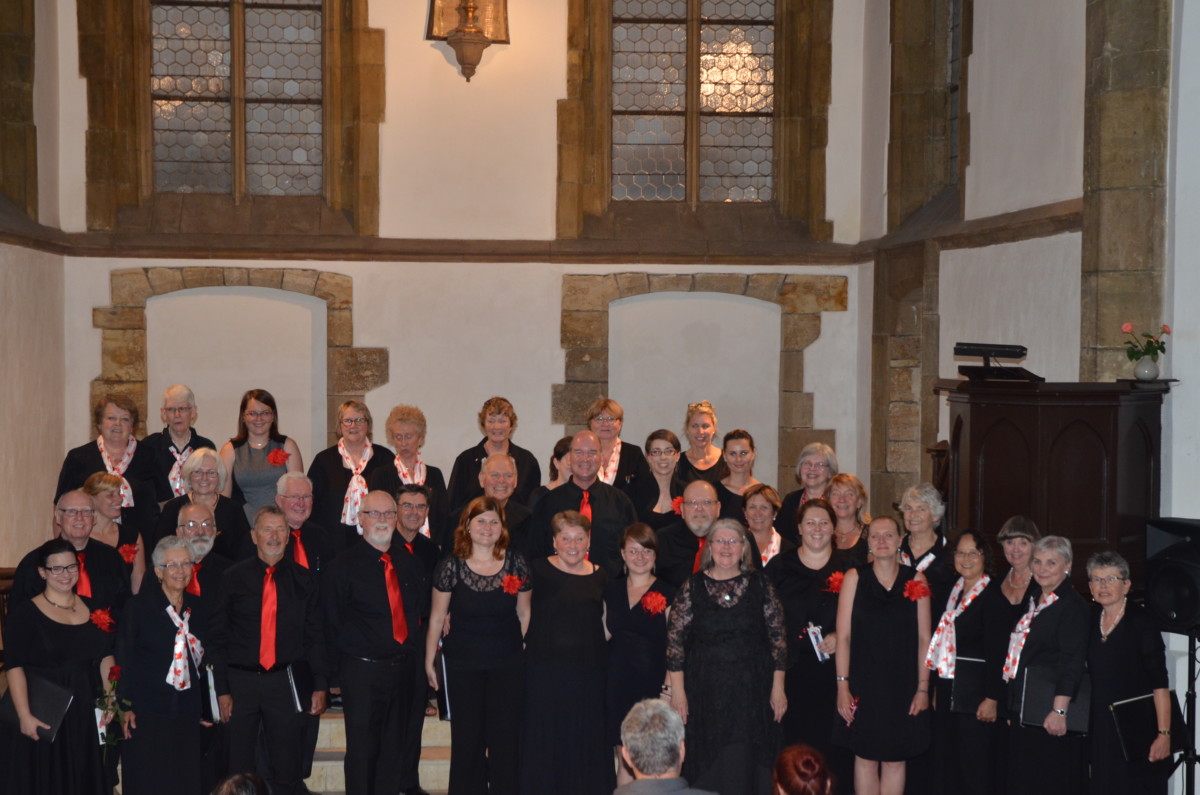 We set off this morning at 9 am for a bus tour of the city. Prague is home to a number of famous cultural attractions including the Prague Castle, the Charles Bridge, Old Town Square with the astronomical clock and the Jewish quarter, all of which survived destruction in the twentieth century.

We had a tour of the Prague Castle which dates back to the 9th century and is the official residence of the President of the Czech Republic . It is a beautiful building with a fantastic view of the city from its gardens.

The afternoon was free time for all. In our case we strolled along the Charles bridge enjoying all the local artisans . We ran into a French market with amazing cheeses and wines which of course we sampled. We had lunch at the base of the Charles Bridge overlooking Vtlva river. We wandered then through old town with numerous sights and shops, then travelled back to the hotel via the subway, which was surprisingly easy. The people that we met along the were friendly and helpful. Love Prague!

Day Five – Janet Inouye
After a very picturesque two hour drive with spectacular mountain scenery from Salzburg to Melk, our first view of the Abbey from the road was very majestic.  The Abbey was built on a rock on the banks of the Danube River.  It covered a massive area and consisted of 470 rooms.  It was designed in the Baroque style.  After an informative guided tour, we made our way to the choir loft and sang a short programme of religious music in the ornately decorated Abbey Church. We were honoured to have in the audience Bernard Leury, a representative from the Canadian Embassy in Vienna.

After a beautiful drive along the Danube River with many river boats and small tugs sailing smoothly along with majestic hills each side, lush green pastures and many grape vines and apricot trees, we finally arrived at the Czech border.  The scenery changed dramatically and the evidence of a Communist regime was very prominent in the condition of the buildings and the surroundings.  It was a pleasant surprise when this replaced with farmlands and many fields of corn, grain, sunflower and the occasional cow.  It was a long drive to Prague. 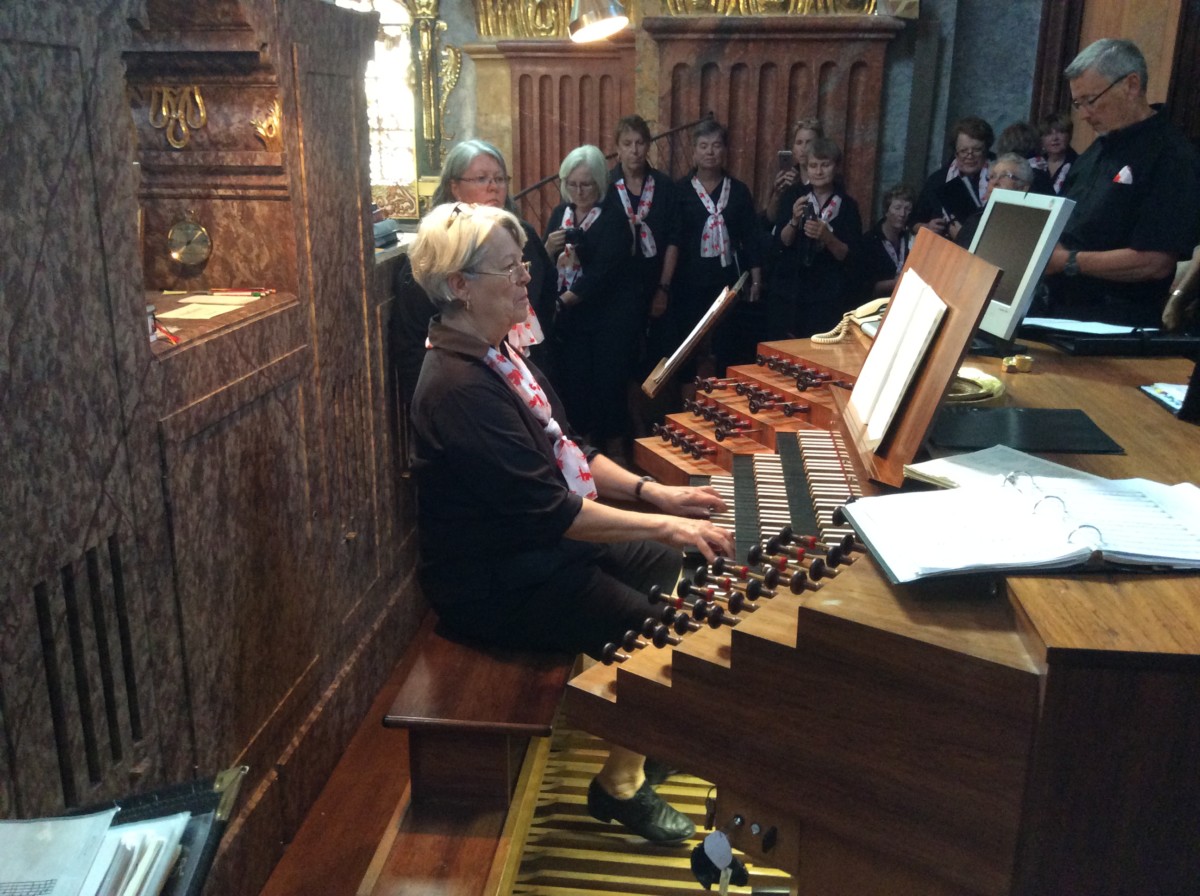 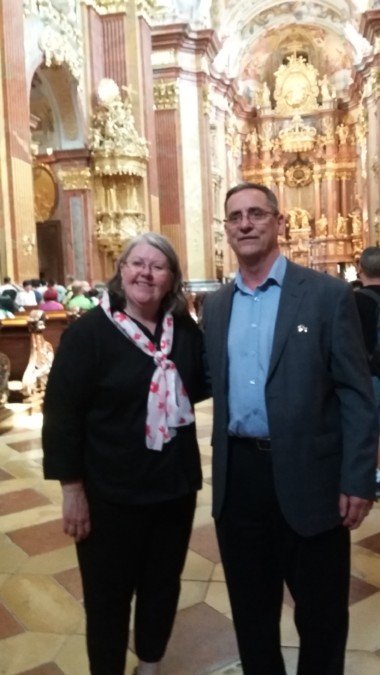 Day Four – Sheila Wattie and Marj Lajzerowicz
Hallelujah!
What a special day today was – the main reason most of us signed up for the trip – to sing Mozart’s “Missa Solemnis” in the Salzburg Cathedral.
Woke up early to a bright sunny day  – hot though – going up to 30C.
After an early breakfast, we departed for the Cathedral’s rehearsal hall. At 8:30, we were ready to rehearse. We were joined by the Hastings and Prince Edward Regional Chorus – a fine group of young people with a very accomplished polished sound. We were also joined by members of the Cathedral choir and a small orchestra. Well, the sound produced gave me “goose bumps”, and even caused a few eyes to tear up.
The Cathedral is immense with the echoing acoustics to go with it. I almost had to pinch myself to make sure I was there.The Cathedral was full. The three choirs joined to sing the Missa as part of the Mass. It was very special and words cannot begin to describe it. We also sang two movements of Handel’s Coronation Anthem. Linda conducted us in the 2nd movement as well as Mozart’s “Ave Verum.” I saw her wipe a tear away and we all felt pretty much the same.
A word about the Cathedral’s music director, Prof. Janos Czifra. He has that ability to draw out the best in the musicians and seems a gentle, kindly man and one totally committed to producing the best possible results.
As the end to a perfect 4 days in Salzburg, this evening, we will be enjoying a traditional Austrian meal. 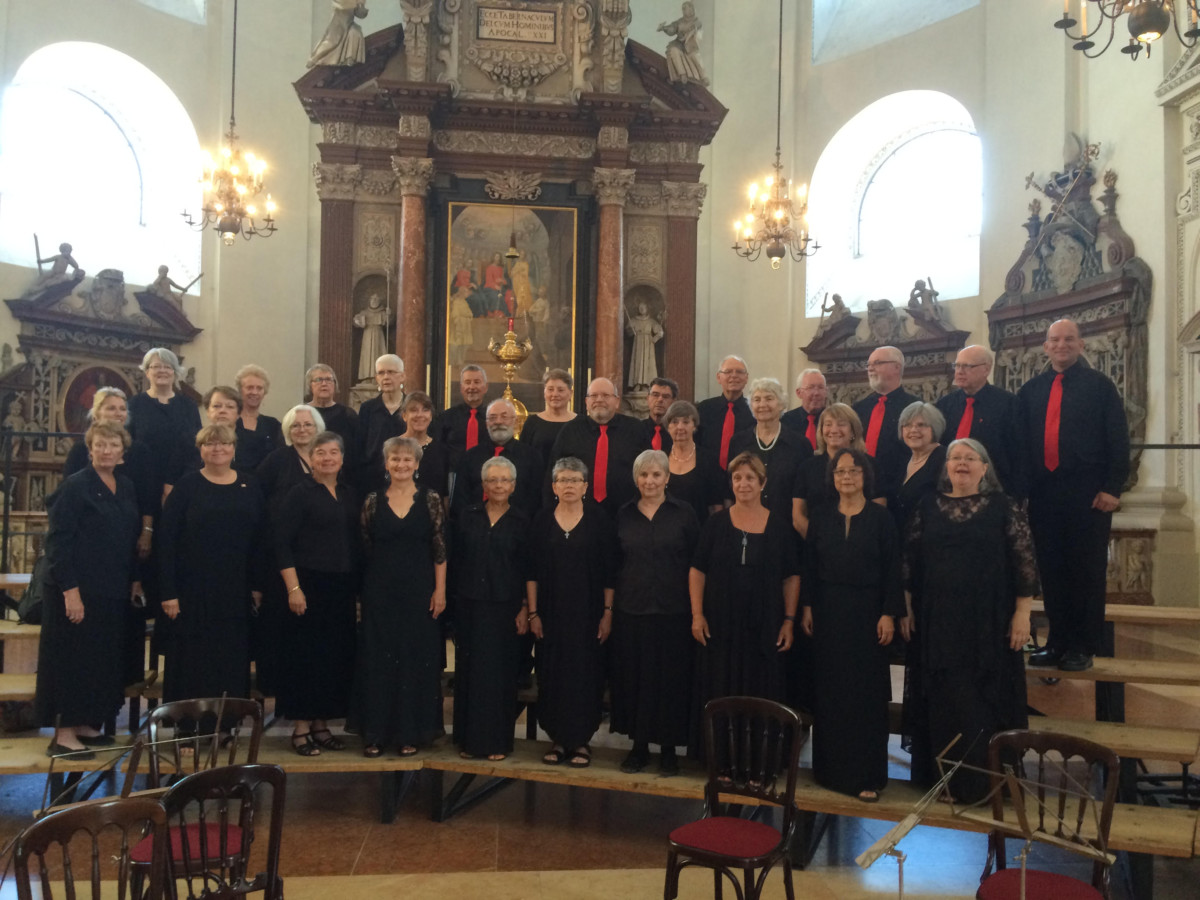 We gave an outdoor concert at the Salzburg Fortress at noon hour; we rehearsed with the wonderful choir from Belleville – the Missa Solemnis and the Ave Verum.  It was an exhausting but very rewarding day .  In the evening, many people went to the Mozart Dinner, which we thoroughly enjoyed – wonderful music between courses.  Very warm weather so we tire out quickly.

The Goulbourn Jubilee Singers (GJS) performed an uplifting concert in the awe-inspiring Mozarteum. The program which opened with Ave Verum, followed by many Canadian favourites, was a fundraiser to support families in need in Salzburg. The audience was thoroughly captivated by the heart-felt performance, even the neighbourhood dogs responded to the wolf-howl at the end of the Miq Mak Honour Song by howling in synchronization.
The choir received many compliments at the reception following the performance. The reception provided a wonderful time for all to enjoy Austrian hospitality in the beautiful garden of the Morzarteum. The event raised a substantial sum for the charitable organization.
The choir was treated to an impromptu visit to the Main Hall in the Mozarteum which is normally reserved for major concert events. The magnificent hall so inspired everyone that the choir spontaneously broke into a most touching rendition of Amazing Grace.

Shortly after our arrival in Munich, Bavaria’s beautiful capital, we toured the city by bus, stopping at Marienplatz for a tour of the historic centre of the city, a visit to St. Peter’s church and lunch in the down town market.  Following lunch we set out on a three hour drive, due east, through countryside that included farms, wooded areas and small villages with churches adorned with ornate spires. The view often included mountains in the background that were reminiscent of Alberta’s foothills. Once in Salzburg we had an orientation walk of the area surrounding the hotel before proceeding to dinner.

July 13: GJS – EU Concert in a Friendship Concert with Cantarina in Prague

July 8: GJS EU Choir in concert with the Hastings & Prince Edward Country Regional Chorus at the Mozarteum in Salsburg, Austria

PREPARING FOR OUR TOUR

An Afternoon in Austria

Preparations were fairly elaborate for this afternon to ensure everyone enjoyed a wonderful time.   On the day of the event, we created a coffee house  environment and  warmly welcomed our guest performers. The choir offered several selections that we will be singing in Europe.  Very many people complimented the participants and organizers with how much they enjoyed the afternoon.

A view of most of the venue with performers on stage.

The Kanata Sports Club were very generous in approaching us and offering their facilities for a fund raiser for us.    They provided great assistance with promotion, set up and logistic on site.  We thank them very much for all they did for us to help make out afternoon a success.   Many supporters donated items and services as prizes for our event and we thank them sincerely.  The afternoon saw our quizmaster lay down the rules of play (e.g. no electronic devices, etc.) and the runners assisted tables as necessary during  six rounds of 15 questions each.

The trophy awarded to the winning team.

Throughout the year we met, often at a member’s hours,  for special rehearsal of our Europe repertoire.  Linda also arranged a coach to provide additional instruction and encoragement.  As always,  delicious food at our pot luck meal break was part of the experience.  At one rehearsal, someone decorated 4 cakes with the 4 parts of a song.

The singers travelling to Europe are hard at work polishing their technique and style.

The four cakes each decorated with a different voice part of the song – for singers to identify. Each part an additional clue.